Menu
Previous Next
Coronavirus: US cases ‘may have topped 20 million’

In the Photo: Texans queue for tests in their cars – more than 10% of tests came back positive over the past week. Reuters.

At least 20 million people in the US may already have been infected with Covid-19, according to the latest estimate by health officials.

The Centers for Disease Control (CDC) says the true number of cases is likely to be 10 times higher than the reported figure.

It comes as the state of Texas halted its reopening as infections and hospitalisations surged.

Some southern and western states have been reporting record numbers of cases in recent days.

What did the CDC say?

“Our best estimate right now is that for every case that was reported, there actually were 10 other infections,” CDC Director Dr Robert Redfield told reporters.

This was because testing was restricted to people with symptoms and asymptomatic carriers were not tested, he said. “We probably recognized about 10% of the outbreak by the methods that we use to diagnosis between the March, April and May,” he said.

Dr Redfield said that between 5% and 8% of the population had been exposed to the virus and urged Americans to keep social distancing, wearing masks and washing hands.

“As we go into the fall, in the winter, these are going to be really, really important defence mechanisms,” he said.

What is happening in Texas?

The state, which has been at the forefront of moves to end lockdown measures, has seen thousands of new cases, prompting Republican Governor Greg Abbott to call a temporary halt to its reopening.

“This temporary pause will help our state corral the spread until we can safely enter the next phase of opening our state for business,” he said.

Other states, including Alabama, Arizona, California, Florida, Idaho, Mississippi, Missouri, Nevada, Oklahoma, South Carolina and Wyoming, have all recorded record daily increases in the number of confirmed cases this week.

While some of the increase is down to increased testing, the rate of positive tests in some areas is also increasing.

In California, which reported a record 7,149 new confirmed cases on Wednesday, Walt Disney said it was delaying reopening of its Disneyland Park and Disney California Adventure Park originally set for 17 July. The company said it first needed to receive approval from government officials.

Governor Gavin Newsom said the state had carried out more than a million tests over the past two weeks, with about 5% coming back positive. Mr Newsom has made wearing a face mask mandatory in public.

The European Union is reportedly considering banning US citizens from entering the bloc as it considers how to reopen its external borders. 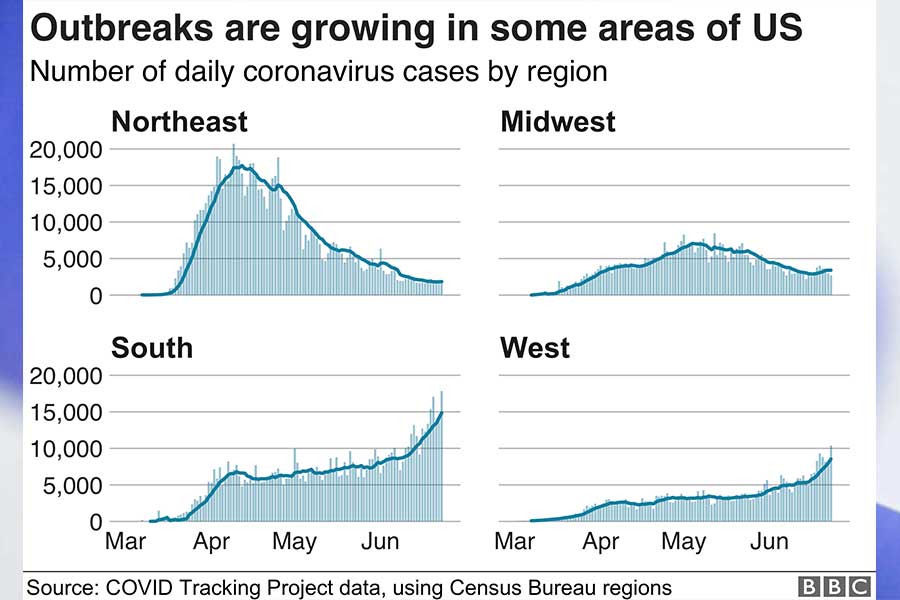 Read about our Team, who’s helped us along the way and who believes in our vision for a world with better health.
Our Team

We are connecting buyers, governments and healthcare institutions from around the world with biotech and medical equipment suppliers.

We are dedicated to providing you with the best experience possible.

Indoor Air Quality Indoor air contains pollutants that can affect human health. Some of these pollutants come from outdoors, and others come